Kyoto – Home of Sake and Whiskey

While operating a sake tour in Kyoto, we receive many questions about Japanese whiskey from guests. Where can people buy them? Which brand do you recommend?
As you know, Japanese whiskey is very popular all over the world today. Some brand of bottles are even hard to buy so have to wait to purchase for a while. I stick to sake usually, but I thought it’s time to learn about whiskey as well.

Fushimi, the leading sake producing place in Japan, is located at the foot of the mountain in the southeast of Kyoto. At the opposite side, the foot of the mountain in the southwest of Kyoto, there is Suntory Yamazaki distillery, where the first whiskey in Japan was born.
It is interesting that there are districts in the west and east of Kyoto that are the roots of the two major alcohols, sake and whiskey, which the people around the world are now falling love with.
Yamazaki single malt whiskey produced at Suntory Yamazaki distillery is very popular overseas.
Optional tour is a very popular, so getting a booking should be made in advance although there’s no need to make a reservation for the free tour. 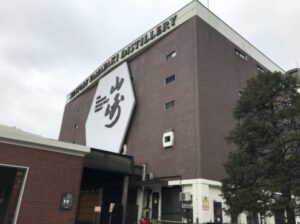 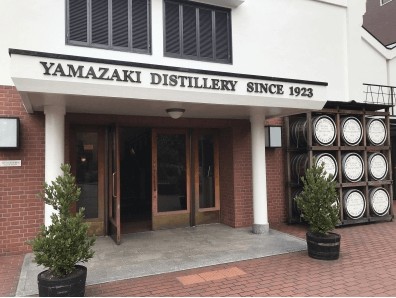 Yamazaki distillery is located in 11 minutes by JR line from Kyoto station. Get off at Yamazaki station, and it’s 10 minutes walk from the station. The tour starts from this whiskey hall. This is the museum where you can visit for free. There’s a tasting counter that you can taste whiskey of Yamazaki. It was one of the popular bottles that could be difficult to purchase. There’s also a shop where you can buy some souvenirs.

1000 yen optional tour is held with about 20 people. Basically though the guide speaks in Japanese, foreigners can borrow the English audio guides and guides there speak fluent English as well. 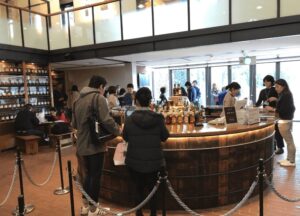 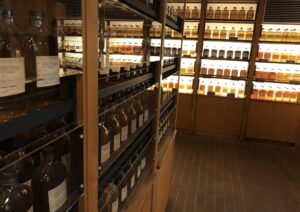 First, there was an explanation about history and the simple manufacturing process of the Yamazaki Distillery. One of the reasons why the first whiskey distillery in Japan was made in Yamazaki is its water. Actually, the production area of sake, Fushimi, is also famous for its high quality spring water. I got to learn that the Yamazaki distillery and Fushimi sake use the same water veins of underground Kyoto.

Learning the Manufacturing Process of Whisky 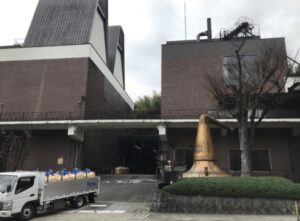 When we entered the distilling still room, there is a scent of “moromi” (fermented mash) that is distilled from the still. There are various shapes and sizes of the distilling still here. And each stills make different flavors, they explained. At this stage, the smell is more like a boiled beer. 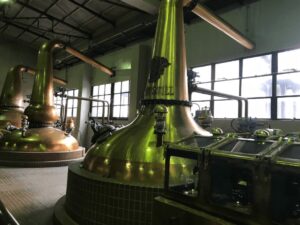 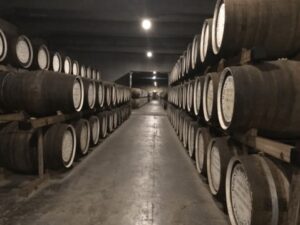 Next we moved to the maturing room. Here’s a lot of barrels that is matured and let it stand until the blender’s blending. The scent changes completely in this room, it turns into a deep scent like a combination of forest and alcohol.

There are also barrels that have been aged since the year the Yamazaki distillery was built in 1923. Even if there are so many barrels, they say that there is no exactly the same unblended whiskey.

After observing the maturing room, we had a tasting of some whiskey at the tasting room. Here four whiskeys were prepared in the glasses. One was matured in a barrel of white oak, the other one was matured in a wine barrel and the other two are common “Yamasaki single malt whiskey”. Snacks that matches well with whiskey are also available. 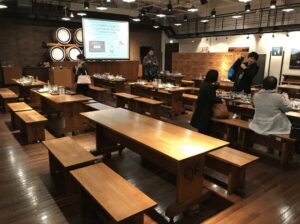 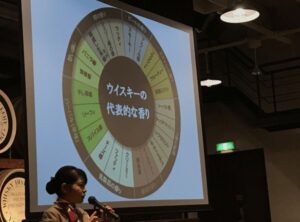 The blender explained each whiskey as smell of various food, which helped me to understand well.

Personally, I liked the whiskey that was matured in a wine barrel the most.
Because I am not used to drinking straight whiskey that much, whiskey with soda were the best for me. 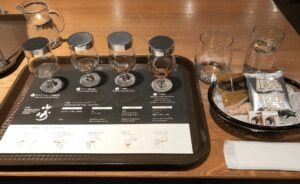 After tasting, we returned to the starting point and then that is the end of the tour. I stopped by the shop at the last but they didn’t sell the Yamazaki single malt whiskey. I still enjoyed it as there were various of products related to whiskey.

Recommend to Join the Tour!

Now I see the reason why Yamazaki whiskey distillery tour is so popular. With a small cost of 1000 yen, you get much information and tour itself is very enjoyable.
Personally the best thing was that I was able to see the maturing room. It was somehow forgettable smell.

Basically, the tour will be conducted in Japanese, but foreigners will be able to enjoy it too with the English audio guides and the tour guides speak fluent English as well.
Optional tour are now not easy to make a reservation, but you can still enjoy the self guide tour, visiting the museum space of the whiskey pavilion for free.
Even if you can not participate in an optional tour, it will be well worth visiting Yamazaki distillery.

If you like Whiskey, Why don’t You Try Sake Tour with Us?

Whiskey fans, do not miss the Fushimi sake at the foot of the opposite mountain of Yamasaki distillery. Fushimi is the origin of sake, that has the most history in Japan.
When you are visiting Fushimi, why don’t you join Kyoto Insider Sake Experience and learn about sake? On our tour you can learn the difference among various kinds of sake. And you will be able to find your most favorite bottle!

Where to Go in Kyoto